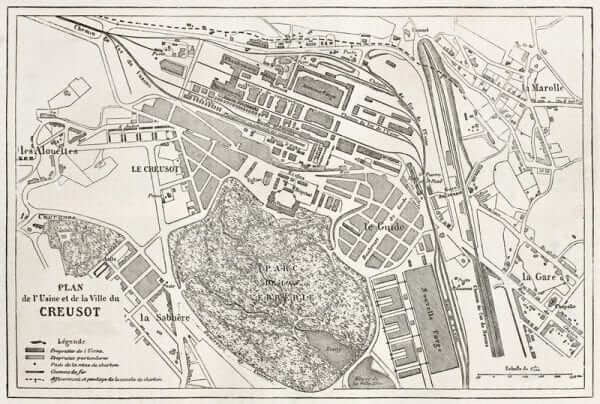 The documents of the era show that they were “laboureurs”, which means that they owned their lands and that they were not working for a landowner. They had some degree of education as shown by their handwriting and ironically the family would know a decline in both wealth and education in the second half of the 19th century after the defeat of France against Germany in the Franco-Prussian war of 1870-1871. It seems that for the Rossignol’s, with the exception of my direct ancestry, the transition from agriculture to industry during the 19th century industrial revolution was not always easy and successful. Antoine at the beginning of the 19th century became a blacksmith at Cheilly-les-Maranches, a village on the Burgundy Canal in the “Côte de Beaune”. A blacksmith is a metalsmith who manufactures objects from wrought iron or steel by forging the metal using a tool or a hammer. Blacksmiths in the 19th century were the initial step of industrialization of the countryside essentially constituted of people working in agriculture. They were also taking care of the horses in fitting horseshoes, which was essential in an era where horses were the only mean of transportation. The fact that circa 1835 well in the first half of the 19th century the Rossignol’s became professional metal workers is extremely interesting and will explain the careers of Jean-Baptiste, Joseph, René and Jean-François.

Customer Service
Email Customer ServicePrivacy PolicyTerms and ConditionsBlogger ProgramReport an Issue
Our Company
About UsBrand StoryNewsContact Us
© 2022 Rossignol 1634. All Rights Reserved.
Rossignol 1634®, the Crest and the Red Dress are registered trademarks
Website is proudly designed by
Phoenix3 Marketing
0